Not sure where to begin? Use these checklists to start planning:

Also known as a Press Release, this is a tool that you send directly to the media to inform them of all the key details of your production. By sending it to them 4-6 weeks in advance of your Opening Night, you are hoping they will:

1. Add it to their listings - either in print and/or online
2. Respond that they’d like to attend the show and review it.
3. If they can’t review it, maybe they can write a Preview or do a story about it.

There are many different styles and approaches to formatting a Media Release/Press Release, but the essential information to communicate is more or less the same. In an effort to clearly explain the components, we’ll describe one version of a media release as per the attached SAMPLE, but please note this is not the ONLY way. If you’d like to see more examples of different formatting styles, many established companies have media releases/press releases available on their websites (usually under the Media/Press section).

Remember: A Media Release is the first experience most people will have of your show.

Let's break down the structure of the sample media release above:

At the Top/Header: For Immediate Release

The first paragraph is the intro paragraph: Similar to an elevator pitch, everything they need to know about the show should be in the first paragraph. Be catchy and concise. Include link to box office information and performance dates.

Give context about the play! Why come see the work? Esteemed playwrights, historical reference/relevance, the type of adaptation it is, if it’s an unusual theatrical form maybe give explanation of it, etc.

Outline the credits of cast and crew. You can break it up if there are many names.

Include set designers, producers, etc. It’s polite and they might also want this document for their portfolios.

Talk about your company! Include company history and mandate.

Other things you may include: 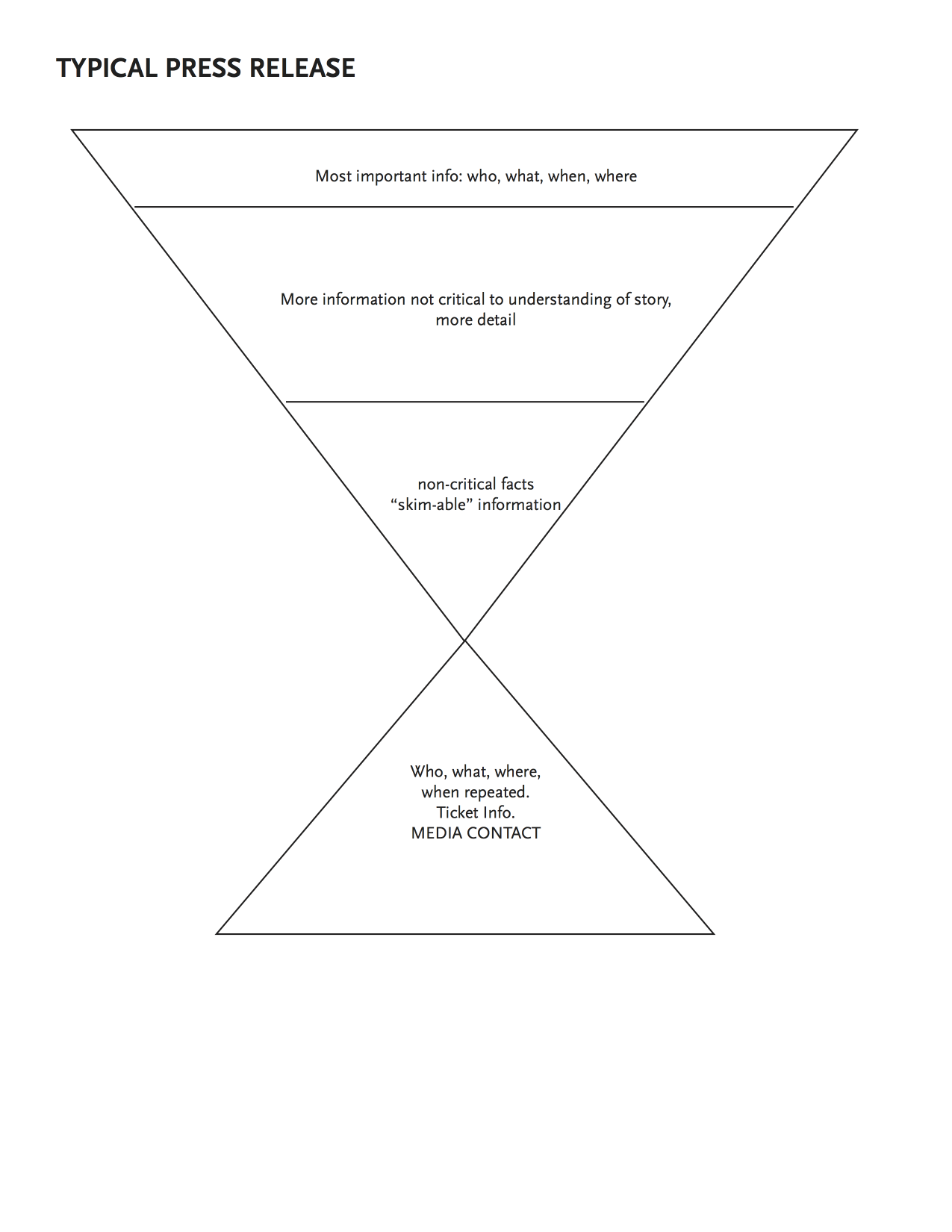 Things to keep in mind when writing and formatting a Media Release:

How to send your Media Release/Press Release?


You can either send it as a clearly-labelled PDF attachment (SHOWTITLE-ProducingCompany-MR) with a short intro in the body of the email, or format your Media Release in a program like Mailchimp or Mad Mimi. You can also send via regular Mail but email is so quick and easier on your budget and schedule.

Where to send your Media Release/Press Release?

Do some research to see who is reviewing shows by companies in your circles; newspapers, magazines, blogs, podcasts, etc. If you are just starting out, there are good odds you won’t get the “Big Papers” coming to review your first show, but by sending a Media Release to them, they will start learning your name and your work.

In cities like Toronto, there are also a lot of niche publications for certain communities who are usually thrilled to be given content if your show relates to their mandate (cultural, religious, interest-based, different languages, etc). Remember, while reviews are very useful, you are hoping to get the word out through their publications to potential audience members. If you can get your kids show in some mommy-blogs or Parenting magazines, that could potentially be more useful than a review in NOW Magazine. Remember, this is all about finding audiences for your shows so which publications are read by your target audiences?

Some other good places:
Canadian Theatre Opening Night Directory - curated by Kelly Nestruck of the Globe and Mail
The Play Map of Canada - run by Playwrights’ Guild of Canada, you can post productions of Canadian plays
Toronto Theatre Database - dedicated to the recording and preservation of the production histories and performance dates of Toronto’s professional theatrical productions, send them a digital copy of your show program and poster.

Sample of Media Release via MailChimp